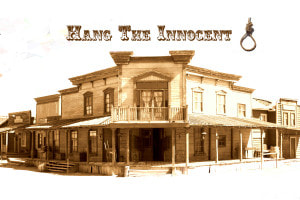 Before becoming Montana’s legendary sheriff, Henry Plummer journeys West in search of a lost brother, gold and love.  His quest is waylaid however by accusations from vigilantes who claim he is playing both sides of the law by leading a gang calling themselves “The Innocents”.

In 1842, off the coast of Louisiana, twelve year old Samuel Plummer and his nine year old brother Henry happen on two cattle rustlers (Warren Spivey and Alex Slade) who are in the process of stealing their pa’s cattle.  The two drifters tie the boys to a tree, but young Henry escapes.   Henry finds his pa and tells him what has happened.  When Pa Plummer confronts the thieves, Warren Spivey shoots and kills the boys’ father.  Later the culprits torture Samuel with a branding iron and ride away with Samuel as Henry helplessly watches nearby.

Ten years pass and despite his mother’s concerns, nineteen year old Henry sets out in search of his lost brother and the gold that Samuel talked about finding out West.  Aboard the ship, The Illinois, which is headed for California, Henry meets up with Jack Cleveland who shares Henry’s dream of striking it rich.  Jack quickly becomes Henry’s partner and friend.
After years of limited success in the gold fields, Henry and Jack give up mining and agree to serve as sheriff and deputy of Bannack, a mining town in Idaho Territory.  Henry’s good looks, his clever sense of humor and his reputation for being fast on the draw quickly make him popular with local residents.  All the while, Henry continues to look for his brother.
Not far away, Henry’s older brother is still with Warren Spivey.  Samuel has taken the name Alex Slade after Spivey killed the original Alex who was no longer any use to him.  Warren and the new Alex steal gold, hold up banks, and quickly become the two of the most wanted men in the Idaho Territory.

While Henry adjusts to the duties of being sheriff of Bannack, he gets involved with a married woman named Lucy Vedder, whose abusive husband treats her like she is his own personal slave.  As the affair progresses, Lucy’s husband, John Vedder becomes more and more suspicious.

In an attempt to track down Alex Slade, Henry and Jack travel to Ft. Benton.  Having no luck finding Slade, they are about to start for home when they meet a missionary and his family who are headed for Bannack as well.  Henry and Jack agree to accompany the Vail family and Mrs. Vail’s sister, Electa Bryan.

Henry and Jack both fall for Electa, who is a beautiful and strong willed woman.   Jack tells Henry he’s “claiming” her as his own.  The competition begins because Henry is smitten by Electa as well.  When Henry and Jack return to Bannack, Henry is in the process of telling Lucy that he has fallen in love with Electa when John Vedder finds them alone in a livery stable.  John attacks Henry with a pitchfork and Henry is forced to kill him.  News of the incident reaches the Sacramento Union and they send two reporters, Michael Hanson and Charles Munson to cover the unusual story of a sheriff on trial for murder.  The trial takes place and the judge sentences Henry to serve ten years in San Quentin prison.

While Henry is in prison, his brother travels to Sacramento in order to become a Pony Express rider.  Alex breaks his arm during one of his rides and ends up staying with the Buckland family.  While Alex recovers, Sandra, the daughter of the Buckland Station manager, falls in love with him.  Just as Alex is about to leave, the Paiute Indians go on the warpath and kill Sandra’s mother and kidnap Sandra.  Alex succeeds in rescuing Sandra but then heads back to Idaho Territory to “find himself.”
After serving six months in San Quentin, Henry’s friends are successful in getting him pardoned by the territorial governor.  Henry returns to Bannack, where Jack is now sheriff.   Jack warns Henry that Electa is his and that Henry needs to stay away from her.  Ignoring Jack, Henry pursues Electa. They quickly fall in love and get married on the banks of Grasshopper Creek.  Jack’s resentment  of Henry escalates  and he begins to drink heavily.  Finally, the town fires Jack and offers Henry the chance to be sheriff again.

Henry, who earlier promised Electa that he would start a new life with her, yields to the temptation to be sheriff and accepts the job.  Robberies and violent crime increase as Henry attempts to maintain law and order fail.  Soon rumors spread that Henry is secretly the leader of a blood thirsty gang called “The Innocents”.   Meanwhile, through a series of unusual events, Henry uses his wit and his status as sheriff to save his brother who is about to be hanged in a nearby town.
Back in Bannack, Henry and Jack’s relationship continues to deteriorate.  Drunk and angry, Jack puts a gun to Henry’s head and threatens to expose Henry’s true identity as the leader of “The Innocents”.  Henry shoots Jack in the foot and puts Jack in jail.  In a cell next to Alex Slade, Jack finally figures out that Alex Slade is actually Henry’s brother, Samuel.  After Jack is released from jail, he waits for Henry to leave and releases Alex Slade from jail as well.  Jack’s plan is that the town authorities will believe that Henry purposely let Samuel escape in order to save him from being hanged.

Meanwhile, a number of vigilantes have established themselves as an organization that is hell bent on confronting the lawlessness that has descended on Bannack and the surrounding territory.  Acting as both judge and jury, the vigilantes track down and hang members of “The Innocents” that Jack has identified.  Despite some doubt as to whether Henry is an “Innocent”, the vigilantes arrest him and accuse him of being the leader of the gang.  The vigilantes quickly hang Henry.  However, Henry cheats death when he collaborates with the town’s undertaker and fakes his own hanging.  Henry secretly leaves town and begins his search to find his brother before the vigilantes can track him down.

In the climactic scene, Henry arrives just after the vigilantes have captured his brother.  Just as they are about to hang Alex, Henry empties his gun at them.  Henry’s brother is able to escape, but Henry is not so lucky.   Alex watches helplessly as the vigilantes now prepare to hang Henry.  Jack spots Alex in the distance and prepares to shoot him.  When Henry tells Jack that Alex Slade is actually his brother, Samuel, Jack aims his rifle to shoot Alex anyway.  Henry pulls a derringer from his pocket and kills Jack.   Alex watches from the top of a hill as the vigilantes hang Henry.